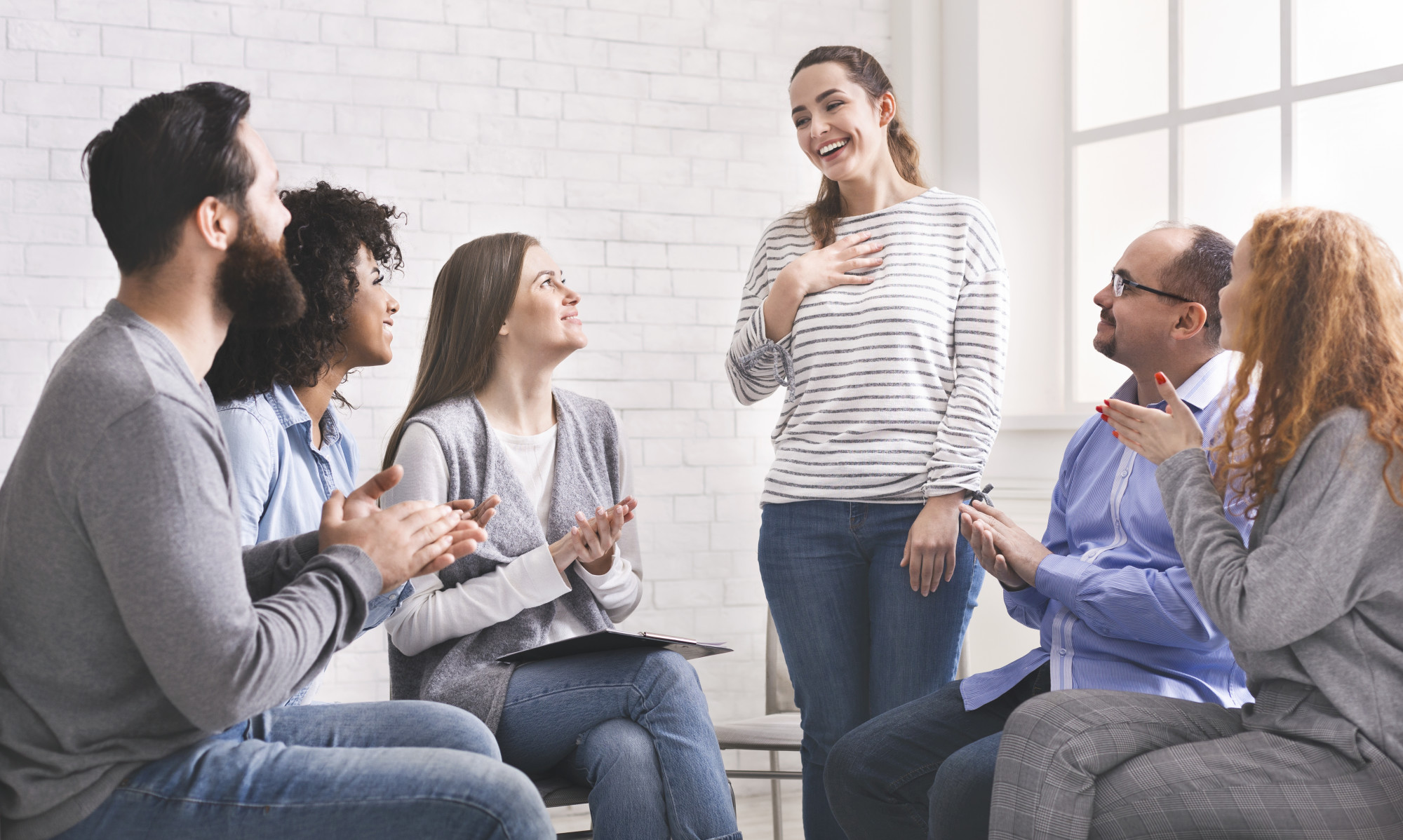 If you or a loved one is experiencing or has experienced the pain of addiction, you are not alone—over 21 million Americans suffer from at least one addiction. Unfortunately, only a small fraction of that number is actively receiving treatment at any given time.

Those with substance abuse disorder, often don’t realize that their behavior is self-destructive and harms the relationships that they have established, both personally and professionally.

Addiction recovery often involves the implementation of a 12-step program because studies and real-life evidence have both shown that participating in said programs is one of the most successful methods.

12-step meetings encourage members to face their demons head-first and make an honest attempt at righting some of their wrongs, helping and recovering through their belief and reliance on a higher power. Let’s take a deeper dive into twelve-step programs and why they are so effective.

What Exactly Are Twelve Step Programs?

A 12-step program is a series of twelve tasks that an individual who may be suffering from substance abuse disorder is asked to complete as a part of their road to recovery.

A “sponsor,” or someone similar to a recovery coach, is typically an important part of such programs, as they are usually recovering addicts themselves that have completed or are in the final stages of the program.

Originally developed for Alcoholics Anonymous, twelve-step programs also encourage current and former addicts to help one another through mutual support and accountability.

While reliance on and a belief in a higher power is also one of the major tenets of the program, the belief in the Christian portrayal of God is not a requirement.

The use of a 12-step program is so prevalent that, according to SAMSHA (Substance Abuse and Mental Health Association), an estimated 74% of recovery programs employ some iteration of such a system.

What Are the Twelve Steps?

Breakdown of Each of the Twelve Steps

Above are simple generalizations of each of the twelve steps involved in twelve-step programs. Next, we will take a look at each of the steps as they are specifically written. We can then drill down a bit more into examples of what each might mean for each individual working toward addiction recovery.

1. “We Admitted We Were Powerless Over Alcohol—That Our Lives Had Become Unmanageable.”

Often considered the hardest step to take, the first step is a doozy. Participants must be able to admit that they have a problem with substance abuse disorder. Further, they must admit that they can no longer manage their lives without help from the program or another individual that can help keep them accountable.

This is often the most difficult step because it is the true jumping-off point for those suffering from substance abuse disorder. At this step, they must acknowledge their demons and stop lying to themselves and others that their habit is manageable.

2. “Came To Believe That A Power Greater Than Ourselves Could Restore Us To Sanity.”

At this step, the individual participating in the 12-step program must begin to believe that a higher power is the ultimate route to overcoming their addiction. This tenet has the potential to scare off some individuals that are on the journey to recovery because they can start to associate the program with having to go to “church” or that they are being forced into some kind of religious activity.

On the contrary, twelve-step programs encourage those in recovery to believe in whichever entity or higher power they choose – not necessarily one of the mainstream deities or the traditional Christian theology of what God is and all that worshipping such an entity entails.

Rather, a “higher power” can be something as simple as a father’s love for their children. Often, such examples are more effective because they are more tangible and close to home.

3. “Made A Decision To Turn Our Will And Our Lives Over To The Care Of God As We Understood Him.”

The verbiage here is admittedly somewhat confusing when coupled with Step #2. While most participants interpret this as the Christian version of “God,” and understandably so, it is a bit outdated. Turning one’s will and lives over to the care of a higher power is a better wording, especially considering the above example of a “higher power” being a parent’s love for their children.

Turning one’s life over to the higher power, that is, the love of their children is a much easier task for those who do not necessarily subscribe to the Christian church. Twelve-step programs are meant to be as inclusive as possible, so this is an important aspect of the system to keep in mind.

4. “Made A Searching And Fearless Moral Inventory Of Ourselves”

This one is fairly self-explanatory. It’s going to be difficult to face your demons if you are unable to rely on your higher power and be honest with yourself. If there wasn’t a problem, you wouldn’t be here to begin with. This is the step in which the individual accepts that.

5. “Admitted To God, To Ourselves, And To Another Human Being The Exact Nature Of Our Wrongs.”

In short, the individual in the twelve-step program has reached a point in which they have owned up to their issues, and they should now be ready to admit that to themselves and a few select other sets of ears – their higher power and another trusted human being.

6. “Were Entirely Ready To Have God Remove All These Defects of Character”

Another step that may be hard to swallow for those that are not inherently religious, this step is still all about the addict relenting and understanding that their willpower alone is likely not enough to get them through their substance abuse disorder.

7. “Humbly Asked Him To Remove Our Shortcomings”

See #6. Giving faith to each individual’s higher power is of paramount importance in this step, which can be facilitated well by an experienced sponsor. The death of ego and excuses is one of the single most important steps on the road to recovery for someone with substance abuse disorder.

8. “Made A List Of All People We Had Harmed, And Became Willing To Make Amends To Them All”

This is one of the most cathartic of the twelve steps in any 12-step program. Sitting down by themselves and recording a list of people that the addict has harmed—whether physical, emotionally, mentally, or financially—is a harrowing experience for any person that is serious about recovery.

9. “Made Direct Amends To Such People Wherever Possible, Except When To Do So Would Injure Them or Others.”

Arguably the most uncomfortable step in any twelve-step program is step 9. Contact the people on the list that you made and attempt to make amends.

This is not only difficult because it’s awkward, but it’s the ultimate ego-swallowing experience. Calling up an old flame, for example, and apologizing for your behavior… that’s humility. It’s all part of the program.

10. “Continued To Take Personal Inventory And When We Were Wrong, Promptly Admitted It.”

Step 10 is all about a continuance of the recovering addict’s humility and honesty. It’s important in any walk of life to take a regular mental inventory of your mental state, so it’s even more important to do so with a full head of understanding in regard to your substance abuse disorder.

11. “Sought Through Prayer And Meditation To Improve Our Conscious Contact With God As We Understood Him, Praying Only For Knowledge Of His Will For Us And The Power To Carry That Out.”

The description says it all. There is no need to elaborate other than to say that the individual has come full circle and achieved a certain level of self-awareness.

Through prayer to one’s higher power and meditation upon their path, each person comes to understand that while individuals have the power to change some things, other things must be left to a higher power and the will therein.

12. Having Had A Spiritual Awakening As The Result Of These Steps, We Tried To Carry This Message To Alcoholics, And To Practice These Principles In All Our Affairs.

If an addict has made it to Step 12, there is (again), no need to elaborate. It all comes down to self-reflection, continued diligence, and assistance to fellow addicts.

Those who have completed twelve-step programs have no doubt gained a passion for helping others find success by following the same road to recovery.

Yes, they are. For whatever unfortunate reason, an adolescent child has found themselves in an addictive situation. They need to spend time in a recovery facility that is equipped with professionals that understand the hormonal ups and downs of the adolescent mind coupled with the delicate balance of dealing with substance abuse disorder.

Quick and simple answer – yes. Would you rather the adolescent go through the program now while they still have support from their parent or guardians, or wait until they have a full-blown case of substance abuse disorder once they are grown and out of the home?

The sad fact is that children who begin using drugs and/or alcohol at or before the age of 18 suffer from full-blown addiction by age 20 most of the time. While most teens tend to be warier of the program, they can be encouraged to participate by explaining the feeling of community, friendship, and belonging involved in twelve-step programs.

After all, most children who suffer from drug or alcohol addiction didn’t get to that point at such a young age if they weren’t already feeling some sort of void in one of the aforementioned areas of their lives. Such opportunities can also give teens an excellent opportunity to speak without fear of consequence and help them understand their feelings better by doing so.

Don’t Leave It to Tough Love

If your child or a child of a family member is suffering from drug or alcohol addiction, the time is now to help find support for them through twelve-step programs. If you are in or around Georgia, please contact us to learn more about what steps to take next. If you are not ready to take that leap yet, please at least take a look at some of our other articles to learn more about addiction recovery for teens and adolescents.

When conversations don’t work or when you’ve noticed that the problem has already gotten out of hand, it is urgent for you or the guardian of the teen to contact a recovery center as soon as possible. Their life hangs in the balance whether you immediately realize it or not.

What Is Dual Diagnosis Treatment for Teens?